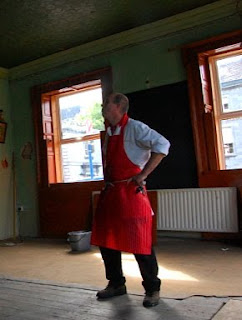 Frank Glynn is right back at the front line after our Sarsfield Bar adventure.
If you've been following our blog you'll know that Frank Glynn is the owner of the Sarsfield Bar/ Spirit Store and was the patron of our SpiritStore Art Cafe project.
Actually, more than a sponsor, Frank was involved throughout as an advisor and developer. Talking to him over the months of the project, about all sorts, we inevitably talked about the butcher business because he owns Frank Glynn's Butchers.
It's amazing how much we've learned about the meat industry in limerick because of conversations at his shop, in the Sarsfield Bar, or on the road. His knowledge of butchers craft, it's Limerick history, his love of the business, discernment and insistence on quality was an inspiration.
We've come to believe that Butchers are at the very heart of Limerick's food culture. The cuts and choices of meat are central to the culinary and social experience of many of Limerick city's people.
No wonder Limerick was called 'Pigtown'. A number of these conversations gave us the inspiration to serve Packet and Tripe at ev+a's opening day. 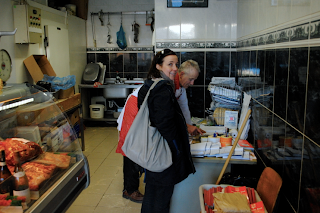 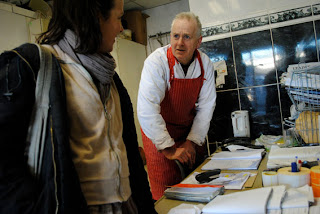 Marilyn with butcher, Ciaran in Frank Glynns Butchers near the milk market pricing an amount of meat for the 'Packet and Tripe' ev+a event. Ciaran gave his expert opinion on the weights and measures needed for the event.
Franks Butcher's shop is on Cornmarket row, call in and say hello! 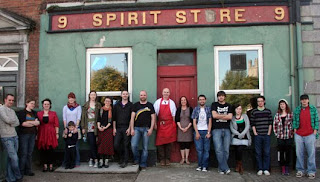