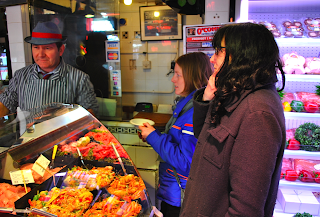 Dawn and Sharon (who you might know from Teaspach Theatre Company) ordering the Packet and Tripe off Paul O' Connell of O' Connell’s Butchers who generously donated the material for Saturday. We have worked out the amount to serve based on the Kitchen space and time available in French’s Café on the Day. The quantity is therefore dictated by this situation i.e. the Street dictates.

On the recommendation of many people who told us during our research over the past few weeks that we should use the 'Honeycomb' tripe rather than the other, we have followed the advice!
See the images below - two types of Tripe 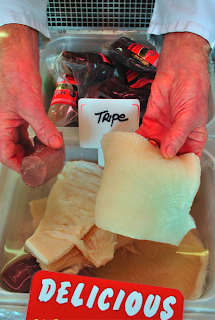 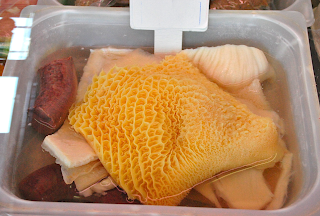 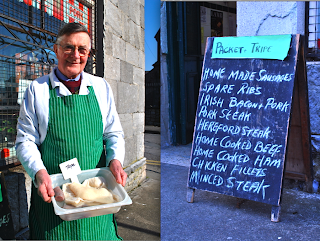 Packet and Tripe is found in butchers all over Limerick city. This was photographed in Corcoran’s Butchers in St Johns Square (Est. 1922) with the kind permission of the proprietor George Russell, seen here. George has sold Packet and Tripe for many decades and has all the stories of Pigtown. He told us that lime was used to bleach the Packet in those days. 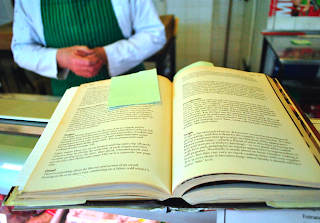 Recipe Book in Corcoran’s.
George compared his oral history of the dish with Delia Smiths Recipe of English Tripe from a well-used copy of her book that is kept in the Shop.
Posted by SpiritStore Art Project at 5:06 PM