From Modding to Activism 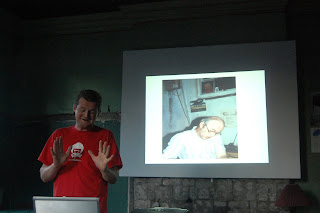 In the last week - Shane Curtain known to many by his work with Cheebah (http://cheebah.typepad.com/cheebah_hip_hop_reggae_fu/2009/06/i-love-limerick.html) spoke about Ellen street, in Limerick city.... more on his talk to come later....

Ellen St by Shane Curtin.
Cheebahs Shane was wearing his historians Hat for a talk on his chosen subject of Ellen St this evening. This is the street that bookends the SpiritStore with the neglected hulk of the Opera Centre, (so called) development in the Middle. Its a contemporary path in the City currently balancing a Garden centre, Sex Shop, kebab shop, Head Shop, and an Antique Shop yet it maintains an aura of backwardness about it, a resigned air, biding its time as it cowers under the crumbling shadow of ‘progress’.
Shane carefully outlined a series of events that had Ellen st in common. Quinns bar was one of Irelands first Gay friendly spaces. It also held a Market in its courtyard space on Saturdays that was the prime alternative / hang out spot for The citys Artists and Hipsters. The clothes Label HOBO started out here, and a Coffee area hosted an Art Gallery that gave many Limerick Artists a platform in the 80s including the Photographer Brian Cross.
The arrival of The adult shop Utopia in the 90s instigated a god fearing protest that read like a lost episode of Father Ted with the Owner eventually supporting the indign 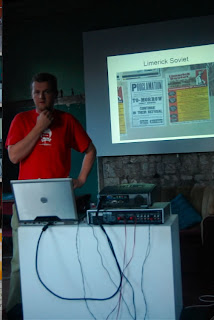 ant local woman s run in the Local elections as she had given his Shop so much publicity.
There was a fix it space place held together with wires and dust that you could leave your radio and TV into be be repaired or rather transformed as Shane's description brought to mind something scripted by Terry Gilliam here.
The description of the Ellen st Pirate Radio Station was the main topic in this talk and it was delivered with Passion. Its Shane's personal interest and in setting the scene he outlined the duality of the broadcasting laws that operated in the 80s. How the Stations made money (Fianna Fail operating their own in election times while simultaneously campaigning to close them down). The Community service they served and the characters such as John the Man that live in the Cities consciousness to this day. Some amazing vernacular graphics were used to advertise the stations services and there were also photos of the mobile DJ vans that were the bread and butter of the scene.
Why Ellen St? Why not any of the other streets that also had Pirates and Gay friendly spots. Exactly, why not. That was the rhetorical conclusion that finished the presentation. There is History lodged in the streets of Limerick and its representation needs to be fought for. Even the act of investigation needs reminding.
Developers will not fund Historical studies and display the results in their generic Malls paying tribute to areas that have represent decades of social activity. And as the participants fade their stories and progressive achievements are erased under an anonymous unrealistic retail holding space.
Paul Tarpey. 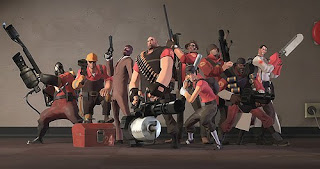 'Games in the Information Society' a talk by Anders Sigfridsson, from the Interaction Design Centre, University of Limerick presented a history of games design, with focus on a move from games designed by games companies to gamer led design - 'modding' and user generated content.


Vertigo Smyth performing at The ARTiculate-Sessions in 2008.

The brilliant Vertigo Smyth came back!!!! And this time brought a double bass accompaniment. http://www.vertigosmyth.com/
http://www.myspace.com/vertigosmyth 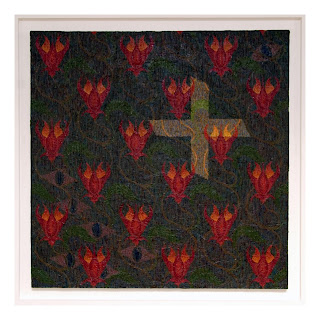 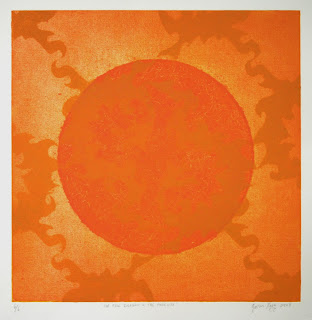 Nancy Serrano brought representatives from The Galway Social Space http://www.myspace.com/galwayspace and from Seomra Spraoi the autonomous social centre in Dublin http://www.seomraspraoi.org:8080/Plone to the SpiritStore to open a discussion on Art and Activism. The conversation turned to comparisons in the structures and models used to set-up, run, manage, fund, and provide social spaces.
Posted by SpiritStore Art Project at 10:53 PM