From The QuietClub to Mathematics 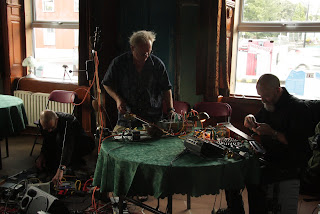 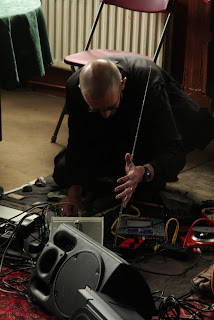 The Quiet Club was formed early in 2006 by Danny Mc Carthy and Mick O'Shea, two of Ireland's foremost sound artists as an outlet for their own work and that of other artists.

Danny Mc Carthy, Mick O'Shea and Harry Moore were kind enough to come up from Cork to treat a SpiritStore audience to an improvised sound performance. Organic in structure and involving electroacoustic instruments and distortion hardware, the three artists worked reciprocally to create a unique composition Though well used to improvising and playing together on a regular basis, each sound artists brought with them a unique approach to sound composition. Danny used combinations of amplified and modified objects (stones, wire brushes,etc) as well as theremin, and modified childrens electronic toys. Mick used home made synthasisers and modified musical/altered instruments Harry used combinations of therenim, distortion effects and modified microphones and string intruments. The combination of all three sound artists playing together resulted in an improvisation that was both engaging and transandental.
http://www.dannymccarthy.ie/index.phpoption=com_content&task=blogsection&id=10&Itemid=36 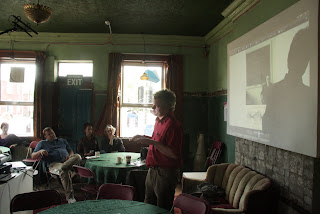 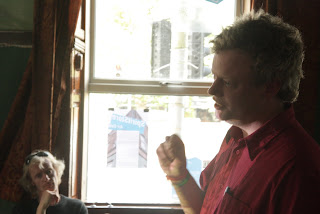 Talking Maths/Art collaborations was Alexis Clancy, we've asked Dawn McCarthy to write a small piece for this item in our blog, which will follow.......................... and here it is, thanks Dawn!
I drank in the Spirit Store on many a wet winter night a long time ago, when the gloom of the place snuggled in around you and Sean stopped serving pints to hear the latest from the lips of ol' Gaybo. It was dark, dreary, dank and totally heavenly.
So when I heard that Marilyn Lennon had gone after the place, like a terrier down a rabbit hole, for the preferred premises of her brainchild SpiritStore Art Cafe, I waited with breath held still. And as we all know the little terrier emerged from a well dug hole triumphant if a little smudged around the eyes from lack of sleep, to give us, along with the help of her dynamic SpiritStore pack, a jam-packed schedule of mind-indulgent playtime for big people, one of whom being, Alexis Clancy, a well known local super-hero with a glorious mathematically inclined mind.
Alexis spoke eloquently for the bones of 2 hours on his present and past work and on various collaborations that he is or has worked on. Sometimes everything would make blind mind-melting sense and sometimes not, but most importantly, to me anyway, was that Alexis, in his own amazing way, did always make some form of sense to me.
As I listened to him and watched his self-selected slip show, which sometimes shone over and around him seeming to weave him into the very fabric of the maths that he was talking about, I felt calm, safe and strangely loved.
It was a great moment both simple and complicated like the man himself. Check out the SpiritStore, as the man Alexis himself so rightly put it -"There is space for us all". - Dawn McCarthy.
Posted by SpiritStore Art Project at 7:29 PM