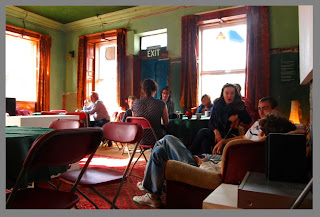 Thanks to everyone who has been in to visit so far or sent words of congratulations and encouragement. Opening day Sunday last was fantastic, Reuban Shortt showed two Skateboard films that gave us his perspective on a vibrant Limerick sub-culture. We discovered the All Ireland Skateboard Champions are being held in Limerick next weekend. Did you know that? we didn't but we do now and we're hosting a cup of tea and a space for debate for the Skateboarders next Sat night before they party. 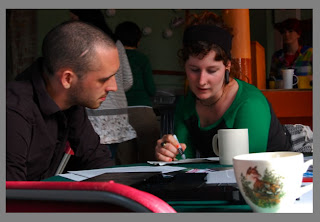 The Shannonside Astronomers Club were out of this world, ouch bad pun, but seriously they were entertaining, informative, open to the continuous line of questioning and in fairness brave considering they had no idea how they'd be received, being the first day. More of this kind of thing please, they were great!

On Sunday night, Carla Burns opened up an evening conversation on the demise of cinema in Limerick city centre with an introduction to her DIY Guerilla Cinema. She invited Jack Burke who ran The 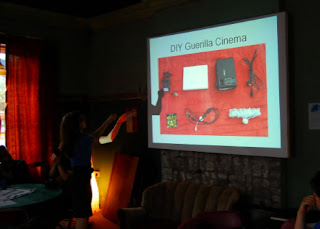 City Theatre and Tom English, who ran The Savoy, later in the evening each related tales from their experience to the SpiritStore. Wonderful images emerged - usherettes selling sweets, spot-lighted as they moved about the dark womb of the theatres amongst the audience, film reels taken from the train and delivered to the cinema by handcart. We were told that Limerick had the largest cinema going population in the world pro-rata at one stage, that altogether there have been twelve city centre cinemas, we were told that there was only one copy of a film in the country at a time, and that up to 2000 film-goers would pour in and out of cinemas in limerick city centre in a single night. We didn't need to be told that here is no limerick city centre cinema now.

And Tadgh Kellehers research on the connectedness of brainwaves and soundwaves. A small audience debated, asked questions, disagreed, agreed and picked his brain in true Café Voltaire style... more of this too please!